Way back in 2004, SadGuru Mahavatar Babaji gave a spiritual call to one of his direct disciples, Dr. N Rajgopal to establish an Ashram in and around Mysuru(formerly known as Mysore), the erstwhile Royal capital of Karnataka - India. Now, the time has arrived to fulfill the spiritual order of the divinity and it is gathering momentum.

The Villa plot would be priced* as :

*Registration and other costs would be extra as actuals.

Why Invest on Spiritual Villa plot?

With the recognition of nuclear family as the basic social unit, the Indian system of joint family has not only collapsed but also dealt a massive blow to the aged persons. With the busy lifestyle gripping every family, no one has any time for looking backward or for that matter look after the old people in the family. Scarcity of land and need for vertical housing, space constraints, pressure on women to earn, high cost on child education, decline in home cooking and dependency on hotel or bought-out food, lack of time, need, interest or dedication in taking care of aged people or space to accommodate them has made the life of senior citizens miserable. It is so pathetic that the aged parents are considered a spent force and their presence is ignored or unwanted in the family by their own children. Many a times they are humiliated by their own children, as being burden to them. The absence of respect from such aged parents’ son or daughter makes them a laughing stock even among their grandchildren.

Many aged persons cannot and do not want to be a burden to anyone. In the last leg of their life, they would surely find much more assured comfort and safety in the company of similar groups. Through such groups they not only get protection, care and comforts, but all their needs also would be attended to by likeminded similar interdependent group members besides the Babaji Sannidhan volunteers. Therefore, the Senior Citizens of the asylum or the Spiritual villa plot investors would doubly benefit and be assured of their future protection from any onslaught from their own family members or due to any similar situation on account of any act of God. Hence the investment on this Spiritual Villa Plots would be a providence for their future, besides enjoying its own appreciative value by being in such a divinely surroundings.

A little was known about Siddhas and their Kriya yoga tradition. The Siddhas number about 18 and were concentrated in many part of India, more particularly in present Tamil Nadu, still influencing the entire universe. They attained a state of perfection called as “Soruba Samadhi”. The state of perfection, which the Siddha Yogis or the Yoga Siddhas have attained, is due to their penance, magnanimous in selfless contributions and their unique life style. For the Siddhas addressing Shiva, Krishna, Vishnu, Shanmuga, Shakthi or Christ, or Allah so on and so forth are one and the same.

Shiva Purana describes the way Lord Shiva meditates on Mount Kailash since time immemorial. Shiva is worshipped by the Yogis as Lord, and by all the Gods as the supreme Lord. It is said that the history of the Siddha tradition has begun millions of years ago. Lord Shiva initiated Parvathi Devi into Kriya Kundalini pranayama, the scientific art of mastering the breath, in a huge cave at Amarnath in the Kashmir Himalayas (Ramaiah, 1968, p. 108). Siddhas are those who concentrate and hold their breath in the mooladhara, navel, heart, middle of stomach, neck, hairs and raise the Kundalini power.Later Yogi Shiva initiated others, including the Siddhas Agastya, Nandi Devar and Thirumoolar on Mount Kailash. Subsequently Agastya initiated Babaji into Kriya Kundalini pranayama.

The ancient Siddhas had realized that the divine would also descend further into lower planes of consciousness viz., the intellectual, mental, vital, and physical bodies. They become the virtual embodiment of the ultimate Divinity. Such a state is very difficult to be conceptualized by our limited intellect. The Siddhas discovered that through a complete surrender of their being, their ego, and their very lives, the Divinity would in some exceptional cases descend and completely transform them down to their very cells. This transformation was speed up by the intensive practice of various Kriyas, including hatha yoga asanas, meditation, mantras and bhakti yogas, but above all the Kriya Kundalini Pranayama.

According to the traditions and in particular, there are eighteen Siddhas who attained perfection, which included their spiritual, intellectual, mental, vital and physical bodies. The names of these eighteen Siddhas vary according to different sources. This could be due to the fact that each is given the name of the place where they have attained the state of perfection and also it was customary to call them in several names as was in practice since several centuries. Apart from these eighteen Siddhas, popularly known as “Pathinettu Siddhargal”, there are many others like Konkeyar, Punnakeesar, Pulastiyar, Poonaikannar, Pulipanni, Kalangi, Aluganni, Agapaiyer, Theraiyar, Roma Rishi, and Avvai.

A state of being one with the universe and bringing back the universe within themselves is an act only possible for elevated souls. Siddha means an adept or one who attained perfection or “Siddhi”. The 18 Siddhas attained perfection, which included their spiritual, intellectual, mental, vital and physical bodies. Just as a salt doll dissolves and merges into the oceans, the Siddhas have thrown their personality into the ocean of God or the ultimate reality within, and experienced a progressive transformation of their intellectual, mental, vital and physical sheaths. Thus a divine transformation of their entire human nature takes place after attaining such a unique realization. This unique realization is possible only through the Grace of God and the techniques used by the Siddhas to prepare their flesh and lower bodies for the descent of the divinity. These techniques are collectively known as Kriya Yoga Siddhantha.

Mysore and its Significance

Mysore officially Mysuru, is the third most populous city in the state of Karnataka, India. It is also the second largest urban agglomeration in Karnataka in population. It is located in the foothills of the Chamundi Hills about 146 km southwest of Bangalore and spread across an area of 152 km2. The estimated population is over one million. It served as the capital city of the Kingdom of Mysore for nearly six centuries from 1399 until 1956. It has been a winner of the cleanest city award in India regularly over the past several years. The Mysore Palace here has recorded the second largest number of visitors in India after the Taj Mahal.

Mysore is noted for its heritage structures and palaces, including the Mysore Palace, and for the festivities that take place during the Dasara festival when the city receives a large number of tourists from around the world. It lends its name to various art forms and culture, such as Mysore Dasara, Mysore Painting; the sweet dish Mysore Pak, Mysore masala dosa; brands such as Mysore Sandal Soap, Mysore Indelible Ink; and styles and cosmetics such as Mysore Peta (a traditional silk turban) and the Mysore Silk Sarees. Tourism is the major industry alongside the traditional industries. Mysore is well connected to and from all parts of the Globe. 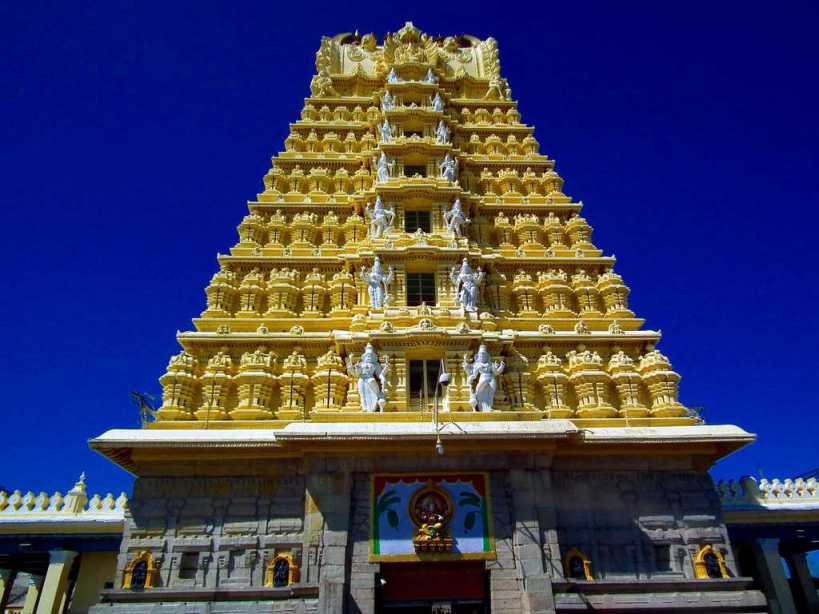 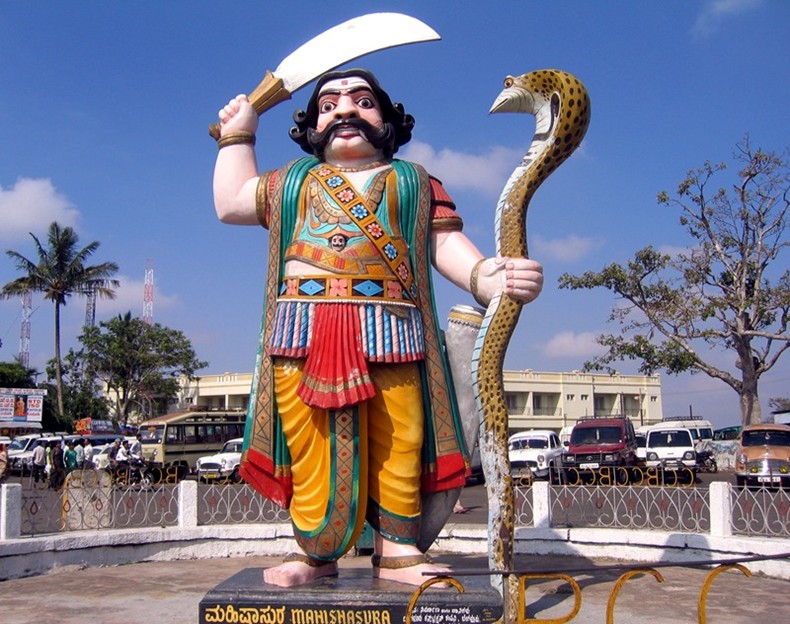 The statue, reckoned to be at least 350 years old, was sculpted during the period of Dodda Devaraja Wadiyar, the King of Mysore who ruled from 1659 to 1673. The Nandi or the Bull measuring about 15 ft in height is carved out of a single boulder.

Ambavilas Palace otherwise known as the Mysore Palace is a historical palace and a royal residence at Mysore in the southern Karnataka state of India. It is the official residence of the Wadiyar dynasty and the seat of the Kingdom of Mysore. The palace is in the centre of Mysore, and faces the Chamundi Hills eastward.

The KrishnaRajaSagara Dam was built across river Cauvery in 1924. It is the main source of water for the districts of Mysore. The water is used for irrigation in Mysore and Mandya and it is the main source of drinking water for all of Mysore, Mandya and almost the whole of Bengaluru city, the capital of the state of Karnataka. The water released from this dam flows into the state of Tamil Nadu, and is stored in Mettur dam in the Salem district.

The Brindavan Gardens is a show garden that has a botanical park, with fountains, as well as boat rides beneath the dam. Sir M Visvesvaraya of Mysore planned and built the gardens in connection with the construction of the dam. KRS Dam was the first to install automated Crest gates during 1920 which was initiated by Sir. M V. Display items include a musical fountain. Various biological research departments are housed here.

It is a very good picnic spot. The landscape of the area represents a complexity of agricultural land, rural habitation, sparingly spread trees and patches of original vegetation at the close by Ranganathittu Wildlife Sanctuary which attracts wide varieties of local and migrant birds. Over the years nearly 220 species of birds have been recorded here in large numbers.